Contrary to popular myth, the body needs fat sources - but of the right kind, however. During infancy and childhood, fat is necessary for normal brain development. Fats, the most concentrated source of energy available to the body, participate in building the tissues, in the proper exchange of fluid and nutrients, and in supporting growth. After about two years of age, the body requires a much smaller amount of fat. Thousands of clinical researches have led to the recognition of the importance of the essential fatty acids, and to enhancing our understanding of the fats we need for life. 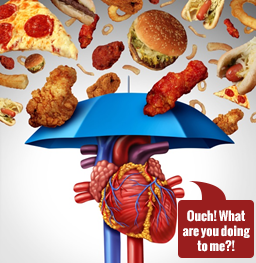 It is necessary to understand the different types of fats available in order to relate them to these health problems. Fats and oils are grouped into three major categories of fatty acids - saturated, polyunsaturated, and monounsaturated - in varying percentages. They are classified according to their predominant type.

The liver uses saturated fats to manufacture cholesterol. Saturated fats are solid at room temperature and are found primarily in animal sources such as meats, eggs, and dairy products. Some vegetable products, including coconut, palm oil, peanut oil, and vegetable shortening, are also high in saturates. They are the most stable and have fewest rancidity problems.

While decreasing the consumption of saturated fats is advisable, several scientific studies indicate that saturated fats could have beneficial biological effects, unlike trans-fats which are always harmful. Some saturated fatty acids, particularly medium chain fatty acids such as lauric and capric acids, have been found to play an important role in supporting the immune system.

However, excessive dietary intake of saturated fats can significantly raise the level of blood cholesterol, especially the "bad cholesterol" (LDLs), leading to heart and artery problems. Arteriosclerosis is the leading cause of death, totaling twice the number from all cancers combined!

However, these poor qualities of polyunsaturates that have been refined and exposed to high heat (at least 320o F), chemicals, light and air become oxidized and rancid. They are filled with dangerous "trans-fatty acids" and contribute largely to the risk of cardiovascular diseases, arthritis and cancer. Trans-fatty acids, harmful immune-damaging synthetic fats, are converted to linoleic acids. They are made by partially or fully hydrogenating liquid oils in order to form fats that are solid at room temperature, such as margarine and shortening. Trans-fatty acids are in the majority of processed and prepared daily foods including breads, donuts, muffins, crackers, potato chips, mayonnaise, cookies, and of course, all deep fried foods. Some would-be "fat-free" products use denominations such as monoglycerides and diglycerides instead of triglycerides, when these fatty acids are saturated or hydrogenated. When large amounts of trans-fatty acids are incorporated into the cells, the cell membranes and other cellular structures become malformed and do not function properly. They have been found to elevate blood cholesterol, by raising LDL cholesterol levels, while simultaneously reducing HDL readings. Both of these conditions are associated with insulin resistance, which is linked, in turn, to diabetes, hypertension, and cardiovascular disease.

Harvard University researchers have reported that people who eat partially hydrogenated oils, which are high in trans-fats, have nearly twice the risk of heart attacks compared to those who do not consume hydrogenated oils. Trans-fatty acid molecules have been linked to altering the communication ability of neurons and may cause poor neural and mental performance. As a matter of fact, membrane loss due to fatty acids is associated with neuro-degenerative disorders such as Parkinson's and Alzheimer's. Incredibly, our ingestion of trans-fatty acids can start as early as infancy. A Canadian study has shown that an average of 7.2% of the total fatty acids in human breast milk are composed of trans-fatty acids transmitted from the consumption of partially hydrogenated vegetable oils by the mothers! Following overwhelming scientific evidence linking trans-fats to cardiovascular diseases, the U.S. Food and Drug Administration will require all food labels to disclose the amount of trans-fat per serving, beginning in 2006.

Monounsaturated fatty acids (oleic acid) are found mostly in vegetables, nuts, and cooking oils such as olive, peanut, and canola. Monounsaturates are liquid at room temperature but solid in the refrigerator, and have a relatively slow rate of deterioration. These fats appear to reduce blood levels of LDLs without affecting HDLs. However, this positive impact upon LDL cholesterol is relatively modest, and dietary intake of these oils should be moderate. For cooking purposes, the unrefined monounsaturated oils, such as virgin olive, sesame, oleic sunflower and oleic safflower oils, are generally more healthful than the common polyunsaturated corn, soy, sunflower and safflower oils. Other monounsaturated fats are in avocados, almonds, and peanuts.

Essential Fatty Acids (EFAs) refer to long-chain (LC) polyunsaturated fatty acids (PUFAs), such as omega-3s (n-3) and omega-6s (n-6). Essential fatty acids cannot be manufactured by the body, and therefore must be supplied from the diet.

The two families of essential fatty acids include:

Every living cell in the body needs essential fatty acids to remain functional. They are essential for rebuilding and producing new cells. A shortage of omega-3 reduces the ability of cells to perform their function efficiently, leading to nutrient starvation and chronic illnesses.

They are essential in the production of prostaglandins (PGs), from the "E" family of eicosanoids, very important short-lived substances that are like hormones They regulate cellular activities on a moment-to-moment basis and exert powerful and profound effects on a vast array of functions within our body. Prostaglandins are important for the regulation of inflammation, pain, gastrointestinal function and secretions, swelling, blood pressure, heart function, kidney function and fluid balance, blood clotting and platelet aggression, allergic response, and nerve transmission, steroid production and hormone synthesis. 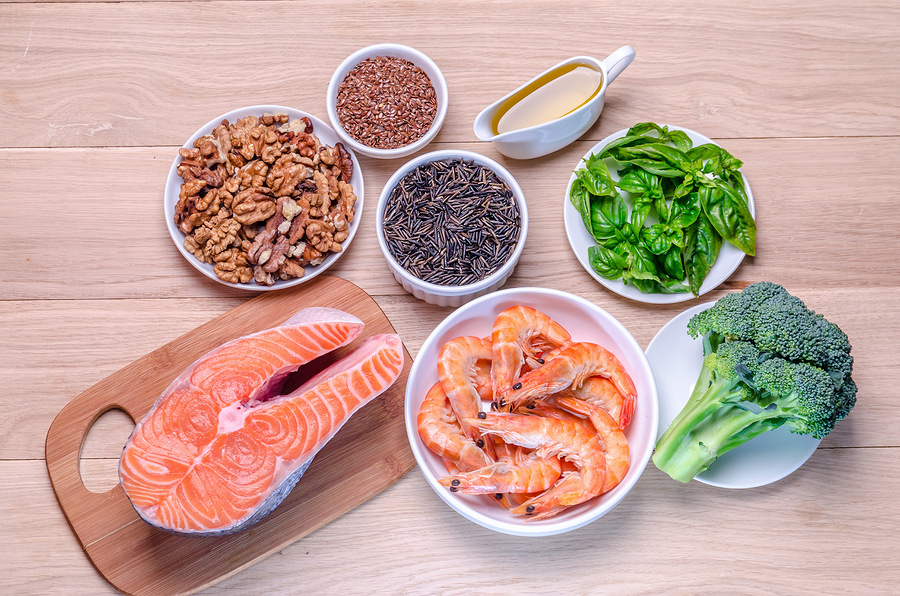 Studies have shown that EFAs have desirable effects on many health aspects. They have been found to improve skin and hair quality, reduce obesity, and lower blood pressure. Cholesterol and triglycerides (LDLs), support thyroid and adrenal functions and reduce the risk of blood clot formation. They have shown benefits for cardiovascular diseases, candidiasis, arthritis, immune-disorders, vision, loss of hair, dry hair and skin, skin disorders such as scaly skin, eczema and psoriasis, liver problems, irritability and mood swings, depression, stress, infertility, and retarded growth or development. They also promote a healthy nervous and mental system.

As stated earlier, among the omega-6 fatty acids, Linoleic acidforms the majority of the polyunsaturated fat eaten in North America and is predominant among commonly-consumed animal, vegetable products and vegetable oils.

Omega-6 fatty acids are metabolized in the body into another compound called Arachidonic Acid (AA) , another omega-6 EFA that most people have in excess. Sources of arachidonic acid are mainly from animal sources and include meat, poultry, and full-fat dairy products. AA leads to the production of prostaglandins of the type PGE2 and of "leukotriens" that are beneficial in healing wounds and injury. However, in excess, PGE2is a highly inflammatory substance. It can cause swelling, increased pain sensitivity, and increased blood viscosity and has been related to conditions such as arthritis, asthma, psoriasis, lupus, rhinitis, lumps, tumors and cancers.

As a matter of facts, a number of epidemiological and experimental studies have implicated the omega-6 fatty acids as being responsible for the development and progression of a range of human cancers including breast, colon and perhaps prostate cancer. The researchers proposed that a high intake of omega-6 fatty acids contribute to oxidative damage and have effects on cell proliferation. Conversely, fish oil has been found to suppress the growth and metastasis of both breast and colon cancer tumors. Other studies have found the cancer protective effect of DHA is due to its ability to induce apoptosis (programmed cell death).

Elevated PGE2 has been found in a number of problems affecting mood, behaviour, and nervous system function. The production of PGE2 can be limited by either decreasing the consumption of animal products, or by increasing production of PGE1 or PGE3.

Another omega-6 EFA that has been shown to have beneficial effects similar to those of the omega-3 EFAs is Gamma Linolenic Acid (GLA) . GLA is found in mother's milk; evening primrose oil; black currant oil and borage oil; nuts; seeds; grains, and other plants such as micro-algae. Linolenic Acid leads to the production of prostaglandins of the type PGE1. PGE1 is important in the nervous system, as it affects the release from nerve cells of compounds that transmit nerve impulses. It tends to have anti-inflammatory properties and is immune-enhancing. It can reduce fluid accumulation and has a significant effect on the nervous system. Some doctors have manipulated the PGE1 pathway to improve depression; multiple sclerosis; PMS (premenstrual syndrome)-related mood changes; schizophrenia; ADHD (attention deficit/hyperactivity disorder), and other conditions.

Many factors, however, can block the transformation of GLA into PGE1 such as an excess of saturated fat and cholesterol; excessive arachidonic acid; most drugs; trans-fatty acids; alcohol and tobacco, and deficiencies of certain nutrients.

Omega-3 long-chain fatty acids and particularly EPA (Eicosapentaenoic Acid), DPA (Docosapentaenoic Acid) and DHA (Docosahexaenoic Acid) are also essential for the optimum development and function of vital body systems. But of the daily dietary recommended intake of 0.6 to 1 gram of omega-3, the average Western diet provides only less than 15%.

Theoretically, omega-6 and omega-3 fatty acids need to be balanced in the diet at a ratio from 1:1 to 4:1. However, modern diets commonly provide ratios as high as 30 parts omega-6 to only 1 part omega-3! Diets that provide omega-6 oils rather than omega-3 stimulate pro-inflammatory pathways in the body. While omega -3s, on the other hand, stimulate anti-inflammatory pathways. In fact, both are essential for human health and it is the balance of the two in relation to each other that is important.

Therefore, emphasis should be placed on providing the body with an adequate amount of omega-3s, either by increasing natural sources or by taking supplements. Consumption of omega-3s is especially useful if a lowered consumption of saturated fat and cholesterol is not being addressed in the diet.